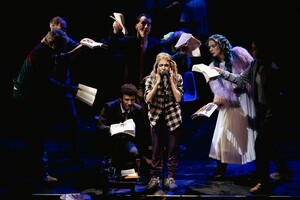 Drive Your Plow Over the Bones of the Dead

Based on the novel by Olga Tokarczuk

I see the Earth in eclipse. I see us moving about blindly in eternal Gloom, like May bugs trapped in a box by a cruel child. It’s easy to harm and injure us, to smash up our intricately assembled, bizarre existence… I see nothing but Catastrophes. But as the Fall is the beginning, can we possibly fall even lower?’ - Janina Duszejko, Drive Your Plow Over the Bones of the Dead

Based on Nobel Prize winning author Olga Tokarczuk’s novel of the same name, Drive Your Plow over the Bones of the Dead is a new work for theatre conceived and directed by Simon McBurney. Tokarczuk’s controversial, violent, genre defying novel – part thriller, part comedy, and part blistering poetic manifesto for the rights of animals and the environment – caused an uproar in its native Poland upon publication.

In the depths of winter in a small community on a remote Polish mountainside near the Czech-Polish border, men from the local hunting club are dying in mysterious circumstances and Janina Duszejko – an eccentric older local woman, ex-engineer, environmentalist, devoted astrologer and enthusiastic translator of William Blake – has her suspicions. She has been watching the animals with whom the community share their isolated, rural home, and she believes they are acting strangely…

Language: in English with German surtitles