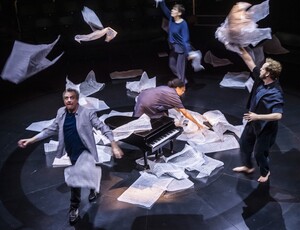 What is the essence of creativity? Where does an idea come from? What do our dreams say about our personality? And finally, what remains of our dreams, what remains of us?
„Tao of Glass“ is a partly autobiographical play from the great actor, puppeteer and director Phelim McDermott and New York composer Philip Glass. For decades, McDermott has been engaged with the works of the inventor of minimal music whose music has been a source of inspiration.

Philip Glass is undoubtedly one of the most important and influential musicians and composers of the present day, who, starting in the US, shaped the musical avant-garde of the second half of the 20th century. Phelim McDermott has staged several of his operas in highly acclaimed productions, most recently for the English National Opera in London and the Metropolitan Opera in New York.
For „Tao of Glass“ a very personal stage meditation on the power and influence of Glass's music, the 85-year-old has composed ten new pieces, which will be performed for the first time on a German stage. It is the most personal collaboration between the two artists yet. In it they address the end of life as well as its beginning with wit and coarseness. Here the wisdom of Taoism meets the findings of psychology. A funny, sad, warm and all-embracing evening that accomplishes one thing above all: it celebrates the power of theatre. Originally planned for Ruhrfestspiele 2020, the production is now finally coming to Recklinghausen.