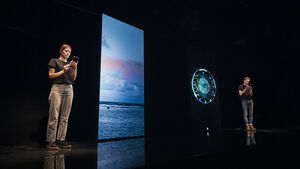 Due to the current pandemic situation, this production unfortunately had to be cancelled.

Created by and with performances of Silke Huysmans and Hannes Dereere

The Pacific island Nauru was named “Pleasant Island” by European colonizers. The once paradisical isle seems like a parable for our modern world: it is marred beyond recognition by the long-term effects of colonialism, ecological exploitation, and destructive immigration policies. Because of its large reserves of phosphate, Nauru was among the richest countries in the world. When these deposits were exhausted, the island declined. Nowadays, Nauru is financially dependent on Australia, which exploits the situation to operate much-criticized refugee camps there. Even though journalists and researchers are denied access to the island, Belgian artists Silke Huysmans and Hannes Dereere managed to travel to Nauru on a tourist visa in 2018. They were able to record conversations with locals and refugees with their phones. In their performance they try to capture the historical, ecological and humanitarian exhaustion of the island, and by extension of our entire planet. The smartphone thus becomes the centerpiece of their performance and the only way of giving a voice to the people of Nauru. How to encounter the limitations of a world that is intent on endless growth? What idea of the future is left on Nauru and the rest of the world?