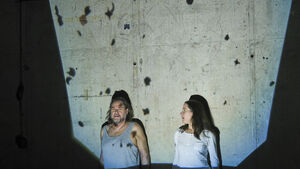 based on the novel by David Grossman

To the End of the Land

David Grossman’s critically acclaimed novel combines art and reality in an almost uncanny fashion. While he was writing “A Woman Running from the News” in 2006, Grossman’s youngest son was killed in action on the final day of the Second Lebanon War. In his novel, Ora – the titular woman on the run – reflects her past. She reminisces about the two men she loved and about her son Ofer, who volunteered for a military operation in the West Bank. Haunted by unbearable visions of army officials bringing her the message of Ofer's death, she decides impulsively to escape her sheltered Jerusalem life and go on a hike through Israel’s back country. Torn between rage and tenderness, passion and despair, Ora tries to keep her son alive by sheer will power. On the road through war-torn territory, her memories of Ofer mingle with painful recollections of her own youth to form a rich tapestry of trauma, love, and loss.

David Grossman skillfully condenses one of the biggest contemporary conflicts into the mundane events of day-to-day life. The author and peace activist creates a memorable set of characters whose lives are irrevocably shaped by war and politics. “A Woman Running from the News” captures the harrowing experience of war in visceral, tender terms that lay bare humanity’s vulnerability in the face of inhumane violence.