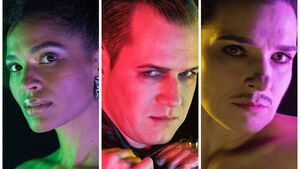 In 1928, the Berliner Ensemble first performed Brecht and Weill’s “Threepenny Opera.” With its groundbreaking sound, the play launched an entirely new genre of musical theater. Songs like “The Ballad of Mack the Knife” combined opera and theater, high art with ‘trashy’ forms of popular entertainment. “The Threepenny Opera” explores the deepest roots of human nature and universal themes like humanity’s eternal pursuit of happiness which is forever marred by the depravity of our dog-eat-dog world. London’s most notorious felon Macheath “Mack the Knife” makes a fortune with theft, pimping, and murder, while the Peachum family turns a pretty penny with organized beggars. When Polly Peachum falls in love with Macheath against her parents’ wishes, the rivalling gangs are locked in deadly power struggle that shakes London’s criminal underworld to its core.
Barrie Kosky, artistic director of the Komische Oper Berlin, directs the fourth staging of “The Threepenny Opera” at Berliner Ensemble. The celebrated director has made a name for himself as a visionary of bold contemporary opera. He is joined by a fantastic company of actors, among them Nico Holonics as Mack the Knife. Expect a dazzling yet unsentimental vision of the roaring 20s.