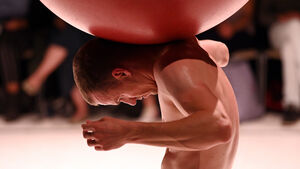 by and with Roman Škadra, Slovakia / Germany

Due to the current pandemic situation, this production must unfortunately be cancelled.

Created by and with a performance of Roman Škadra, Slovakia / Germany

A fight is about to go down. In the boxing ring, a man faces an object. Like a modern-day Sisyphus, Roman Škadra grapples with a large red ball that will not budge. Indeed, it seems to mock the performer in its unrelenting stasis. “Absurd Hero” presents a wide range of scenarios in which failure is the only option. The production combines elements of contemporary circus with theater of the absurd. Škadra skillfully intertwines acrobatics and object manipulation with elements of wrestling and weightlifting for a topsy-turvy circus show. In his absurdity, he is reminiscent of silent film legend Buster Keaton. Škadra uses physicality and comedy to portray an intensely humane underdog whose fallibility makes him the unlikely hero of the show.