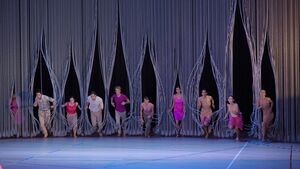 Anne Teresa De Keersmaeker is one of the most influential choreographers of our time. For over 30 years, the Belgian has been a fixture in the international contemporary dance scene. “Rain” is the revival of one of her most iconic choreographies. With this vibrant piece, De Keersmaeker returned to two of her great loves: pure dance and the minimalistic music of Steve Reich. Originally created in 2001, the choreography is set to Steve Reich's “Music for 18 Musicians” (1976). Accompanied by the pulsating tones Reich’s music, ten dancers, delineated by a curtain of fine strings, display an impressive succession of virtuoso dance phrases. The mathematical figures, the sustained repetition, the geometric occupation of the space, the art of continuous variation – everything that has become the choreographer’s signature is pushed to the extreme in “Rain.”

Seven women and three men allow themselves to be propelled by an unstoppable joint energy that binds them together. It's a bustling network in which breath and speed is shared as well as that special comradery that forms when you are beyond fatigue.

„In an equally sensitive, precise and enthusiastic way, 'Rain' combines two of the most brilliant artists of the 20th century in a sweet moment full of energy.“ szenik.eu