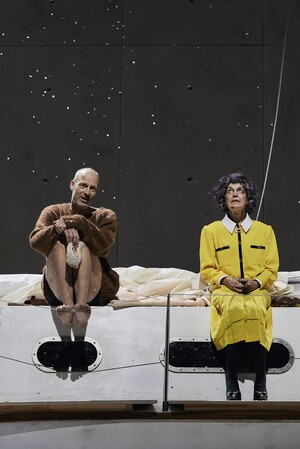 Based on the novel by Christian Kracht

In the Algerian coastal city of Oran – an ordinary town – a strange disease breaks out. Doctor Bernard Rieux suspects what everyone else believes to be impossible: it is the plague. A state of emergency is declared, the city is hermetically sealed, all connections to the outside world are cut off. The plague turns Oran into death row, and all its inhabitants into doomed prisoners. As the disease claims more and more victims, gigantic hospital wards are built, and mass graves follow suit. A nightmare unravels. Doctor Rieux fights without any prospect of his own survival, he knows that his fight against the epidemic is hopeless. The bacillus remains invincible, even though the plague leaves Oran after nine months as abruptly as it came.
Albert Camus' world-famous novel explores the possibility of human action in the face of catastrophe. Written during World War II, it is as much an image of the Résistance's struggle against the occupation of France as it is a timeless examination of the metaphysical problem of evil. Sensual and threatening, director András Dömötör and the brilliant actor Božidar Kocevski bring the essential questions of the novel to the point – as suspenseful as any thriller.

Based on the novel by Anne Weber

Based on the novel by Max Frisch