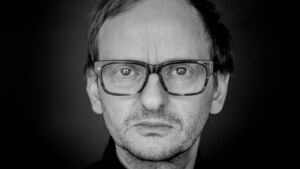 Heiner Müller (1929-1995) was one of Germany’s most influential playwrights and directors in the post-war era. His oeuvre also encompasses poetry, prose and a large number of essays and interviews. Apart from showing his legendary production of The Resistable Rise of Arturo Ui at Ruhrfestspiele this year, we would like to focus on Müller as a poet and radical philosopher concerned with the “perplexity of thought”. His prophetic ruminations on the pitfalls of capitalism appear as timely today as when they were first published.

Milan Peschel is not only known for his film performances, but also for his extensive theatre work as both actor and director. After short engagements in Potsdam and Senftenberg, he was part of the Berliner Volksbühne ensemble for over ten years. In 2011, he won the Bavarian Television Award and the German Film Award for his performance in Andreas Dresen’s film Stopped on Track.