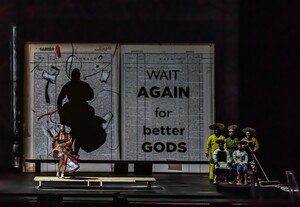 Musical composition and conception by Nhlanhla Mahlangu and Kyle Shepherd

Since his early years in apartheid South Africa, William Kentridge’s art is shaped by theatrical forms of expression. As a painter and sculptor, he has repeatedly experimented with the intersections of theater, music, and (animated) film. Over the decades, a complex and multi-layered body of work has emerged. It was exhibited in the world's most prestigious museums and shown in theaters, opera houses and at festivals. In this regard, "Sibyl" is exemplary of William Kentridge's oeuvre, combining theater, literature, dance, musical theater, and film into a unique work of art.
"Sibyl" does not tell a linear story. Kentridge, whose visual art is dominated by charcoal drawings on newsprint or old files, literally lets his work come into being in front of the audience. The piece is inspired by the prophetess Sibyl of Cumae who, according to legend, wrote the fate of people on oak leaves and placed them on a pile of leaves at the entrance to her cave. This evening for ten performers consists of two parts. Part 1, entitled "The Moment Has Gone", contains a short film and live music. The second part is the chamber opera "Waiting for Sibyl". The result is a visually powerful, musical evening that deals with the creative power of art, the beauty of nature, and its merciless exploitation by mankind. "Sibyl" will open the Ruhrfestspiele 2022.