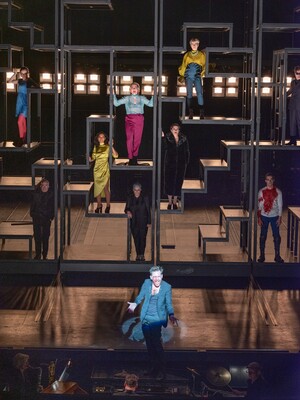 "The Threepenny Opera" became a worldwide success overnight because of its legendary songs and its gripping story about love, betrayal, business, and morality. As outrageous as it is socially conscious, the tale of Mackie Messer, Peachum, and company investigates a world in which people first and foremost have their own material advantage in mind. Even though they enforce their own interests unscrupulously, they hide their radical self-interest under the guise of charity.
Barrie Kosky, artistic director of the Komische Oper Berlin, turns the "Threepenny Opera" into a tale of people who seek happiness in a functional, sober world; they are afraid of constantly coming up short. Yet the fear of the crash lurks in the system, which knows no rules, but only winners or losers: the distorting mirror of capitalism. In Brecht's work, it is not human vices that produce social ills, but the other way around. The characters toy with ideas of love as a romantic relationship between two people, of friendship, of family care, and of compassion as a prerequisite for the fight against injustice. Berliner Ensemble, led by Nico Holonics as Mackie Messer, pulls off no small feat by discussing social coldness without making the characters seem heartless. Their longing for security, closeness, and commitment becomes palpable above all because it remains unfulfilled.

Based on the novel by Albert Camus