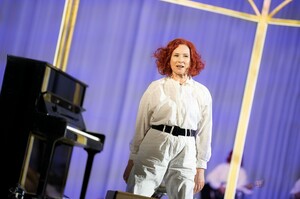 Based on the novel by Anne Weber

Anne Weber’s "Annette, ein Heldinnenepos," which won the German Book Prize in 2020, tells the eventful life story of the 98-year-old Anne Beaumanoir, known as Annette, as a modern epic which vividly reflects the history of the 20th century. Annette grows up in simple circumstances in Brittany. When the German Wehrmacht occupies France, she joins the Résistance at the age of 19 and soon breaks its rules by saving the lives of two Jewish youths. In the Résistance she meets Roland, her first love, and loses him in the turmoil of the last days of the war. Medical studies, marriage, children - the end of the war seems to lead her into a comfortable bourgeois life. But her country, which she has just liberated from the occupying forces, behaves like an occupying power itself. The Algerian War begins, and the French military violently attacks the population. For Annette, a new kind of resistance begins with the independence movement. She has no idea of the consequences of her decision for her young family, for herself, and for the newly emerging Algeria.
After the great success of last year’s "Orlando," Ruhrfestspiele present another production by director Lily Sykes, who cooperates once more with the exceptional actress Corinna Harfouch.

Based on the novel by Max Frisch