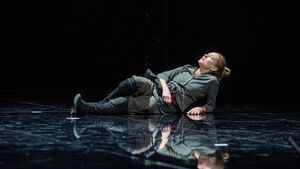 based on the novel by Virginia Woolf

Funny, malicious, provocative – these are just some words fit to describe “Orlando,” Virginia Woolf’s literary masterpiece. The story of a handsome young Lord who begins his journey as Queen Elizabeth’s lover and who turns into a woman after a ravishing feast at the sultan’s court in Constantinople is a mischievous romp through 400 years of European history. On their illustrious quest to become a celebrated poet, the androgynous enfant terrible embarks on amorous escapades with numerous men and women, princesses and prostitutes. Eventually, Orlando abandons dreams of fame and fortune to become an independent artist in 20th-century England.

Virginia Woolf’s fictional biography was published in 1928 and soon became one of her most celebrated novels. It gleefully deconstructs social status, traditional gender concepts, and historiographical master narratives. Orlando’s artistic autonomy and amorous exploits are a celebration of plurality, liminality, and excess. Since Orlando’s only constant is permanent change, they can reflect on social norms and conventions with the necessary distance. The character’s chameleon-like wealth of exuberant personalities makes it a perfect fit for versatile character actress Corinna Harfouch, who takes on this task with deftness and levity. Lily Sykes’ enchanting stage adaptation blurs the boundaries between fact and fiction; it is a theatrical treat that allows fantasy to triumph over reality.