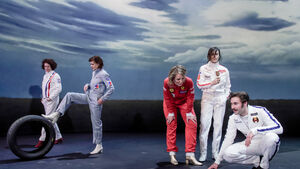 René Pollesch is one of the most important playwrights and directors of our time. In 2021 he will become artistic director of the Volksbühne Berlin. For far too long, no work of his has been seen in the Ruhr region. The Ruhr Festival is showing his latest production "Goodyear" (formerly "Number Four") with the five fantastic actresses Christine Groß, Astrid Meyerfeldt, Jeremy Mockridge, Sophie Rois and Katrin Wichmann.

J: You know, for example, when I smoke - I know it's harmful - it doesn't mean I want to kill myself. But I think about it. Yes. And that brings us to the topic. It was said that the racing drivers' wives always carried their widow's dresses in their suitcases.
S: Can I say something? I have to tell this very briefly properly, because it's an even prettier story.
The widow said: and whenever we saw a black, a chic black dress somewhere, we bought it, because we knew we would need it. And that made her so - what you notice now - so nice and cold... so now it would never be said like that again.