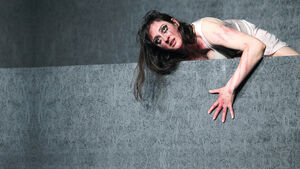 Jason has left Medea; she and the children are threatened with banishment. Through his new marriage to Creon's daughter, Jason receives the definitive right to stay and a socially and economically secure position. Deeply hurt by this betrayal, mercilessly disturbed by Jason's shameless disregard for the marriage contract and the oath of fidelity, Medea devises a cruel plan of revenge. Excessive love turns into excessive anger: Medea decides to kill their children. What can a person give up, what can be taken from them before they lash out mercilessly?

Michael Thalheimer is one of the defining directors of his generation. His productions have received numerous awards, including the Innovation Prize of the television channel 3sat, and the Nestroy Prize. Many of his productions were invited to the Berlin Theatertreffen, including his production of "Medea" in 2013. Constanze Becker received the German theatre prize "Der Faust" as best actress for her portrayal of Medea.