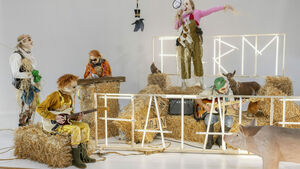 French artist Philippe Quesne conjures up a bizarre and cheerful visual spectacle. Five scarecrows who have lost their jobs because of the climate crisis flock together to form a community of outcasts. They miss the birds and the humans, which have all perished in a collapse of the global ecosystem. Yet this merry band of unlikely heroes is not deterred by the apocalypse. Quite the contrary, they decide to create a pirate radio station that captures nature’s dying breaths and blasts pop music on its airwaves.

Philippe Quesne’s play combines activism with art to create an unforgettable theatrical experience. “Farm Fatale” is a dramatic tightrope act that balances sadness and mirth, tenderness and catastrophe, irony and magic. Without ever giving in to resignation, this post-apocalyptic extravaganza celebrates the restorative power and sublime beauty of nature – which are currently threatened more than ever before. A poetical inquiry into pressing ecological and political issues of our day.