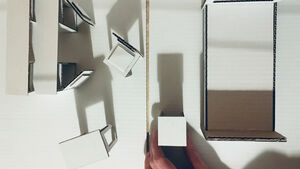 For the Ruhrfestspiele, the staging of the production was made a digital experience as an interactive live game. In "reconstruct:alan-turing", visitors can become active themselves in groups of up to 15 people between 4 and 16 May in order to get to the bottom of the inventor's death.
The live version of "The Alan Turing File" is cancelled.

Alan Turing invented the modern computer, was a pioneer in the field of Artificial Intelligence, and contributed decisively to the Allied victory in World War II with his decoding of the Nazi encryption device Enigma. He was also gay and therefore considered a criminal by the British justice system. In 1954, the dead body of the 41-year-old genius was found in his bedroom. It was labelled a suicide. Yet the exact details of Turing’s death remain a mystery to this day. Was it suicide, a tragic accident, or murder?
The Büro für Eskapismus has created a fictional reality game to honor Turing’s legacy. “The Alan Turing Files” is a unique combination of theater and escape room. It reconstructs Turing’s bedroom on the day of his death and allows groups of up to six visitors to investigate the mathematician’s cause of death. But will sheer logic be enough to decipher this mystery?