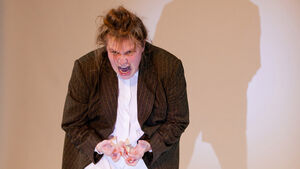 Handke’s “Self-Accusation” sends its protagonist to the confession box and extorts a self-incrimination from her. In the manner of a totalitarian regime forcing their sinners to denounce themselves, the play offers its magnetic lead actress Stefanie Reinsperger a platform for merciless self-flagellation and acerbic criticism of language.

Dušan David Pařízek acclaimed production reveals the parallels between Catholicism and Communism and puts bigoted social concepts of guilt up for discussion, without sparing those of its own medium: "Which laws of the theatre did I transgress against?" In the theatre, only the audience can hear this confession.

„The staging withstands the radicality of the text, especially because of this queen of speech, who scans words like uncertain areas. (...) One cannot not follow her in this mixture of self-flagellation and outburst of rage. Reinsperger is a magnet, a miraculous creature of self-empowerment, devotion, cunning, wit, and accuracy; she more than justifies the title 'Actress of the Year'.“ Der Standard