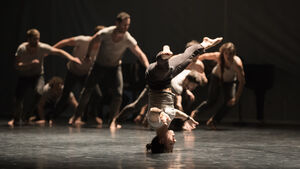 Created by Yaron Lifschitz and the Circa Ensemble

Since 2004, Circa has been at the frontier of new circus and one of the world's leading performance companies in this field – creating powerful works of circus art that challenge, thrill, and delight.

Circa’s main concern is art: The present shows that push the boundary of circus as an art form, blur the lines between movement, dance, theatre and circus. The result is a unique, singular Circa-experience which moves the heart, mind, and soul.

This year, the Australian company make their Ruhrfestspiele debut with a world premiere. In the first circus setting of Stravinsky's “Rite of Spring,” Circa tightly weaves together powerful world-class acrobatics and dynamic encounters suffused with dark humour and rich tenderness. Featuring new composition by Philippe Bachman alongside Stravinsky's “Rite of Spring,” this show features an explosive display of bodies locked in a ritual unto death.

"Under the direction of circus visionary Yaron Lifschitz the Circa ensemble puts bodies on the line for “Sacre” in electrifying explosions of physicality and power." Les Echos

Two other productions dealing with „Le Sacre du Printemps“ at Ruhrfestspiele 2020: „The Sacrifice (Das Opfer)“ and „Robozee vs. Sacre".

For the whole family