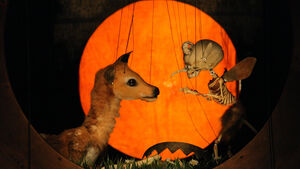 Based on the fairytale “The Elves“ by Brothers Grimm

The fairy tales of the Brothers Grimm are very different to the picture that Walt Disney started to paint in the 1940s. They are archaic stories about sheer survival, cautionary tales told to children to make them stay on the path of virtue.

American puppeteer and director Patrick Sims has always been fascinated by the dark imagery of some of the tales. In “The Waltz of the Hommelettes,” he brings Grimm’s fairy world to life. It is based on “The Elves,” a trio of short stories about gnome-like creatures that wreak havoc on humankind. When the clock strikes 13, the beautifully grotesque puppets come to live and scuttle from one story to another, sometimes helping out, sometimes creating mischief. The gothic atmosphere is accentuated through a beautiful score that mainly uses compositions by Moondog. The legendary musician left the New York music scene in the late 1970s, only to end up in Recklinghausen of all places.

Makes itself understood without language