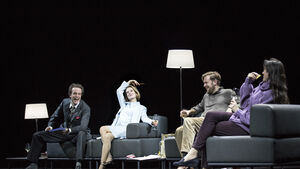 In Yasmina Reza’s “Drei Mal Leben” Henri and Sonja are looking forward to a quiet evening three times. Thrice, the Finidoris ring their doorbell for a dinner party which was scheduled for the day after. Each of the three nights, the couples fight their way through changing alliances as they try to out-manoeuvre one another in a battle for glory, sex, self-respect, and recognition.

Reza’s play maliciously exposes the sham that is complacent middle-class life. By the skilled hands of acclaimed director Andrea Breth, society’s flimsy façade is stripped away to reveal the abyss of human pettiness. Breth’s production, led by a marvellous ensemble of actors, is pure bliss for anyone who enjoys verbal sparring matches and psychological drama.