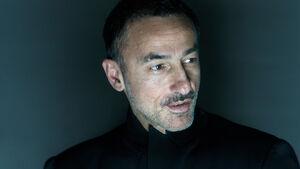 In co-operation with Onassis Stegi, Athens

Last spring, more than 500 performers and dancers from all over the world auditioned for Papaioannou. Those who made the cut have begun rehearsals with him in January 2020. The premiere of his second international coproduction is expected in May in Athens, only four weeks before it will be presented in Recklinghausen. Until then, silence. There can be no title for a work that is in progress in every sense. Or as Papaioannou himself has said: “My works evolve during rehearsal; they are not composed beforehand. I prepare material only in order to kickstart the process – and most of the time, I throw it out. I’ve resolved to not know what the outcome will be ahead of time, to trust in the process. In the end, if I am lucky, the work reveals itself and I try to understand it, to perfect it. I reserve the right to change it all at the last moment. What’s the use of plans and pretensions? Art is praxis. If I talk about it, I will only either mislead you or betray the work.”