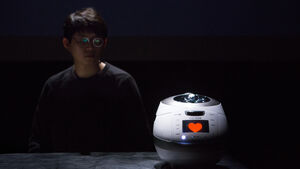 In 1997, a major economic crisis hit South Korea. The crash’s devastating effects, which were mainly felt among the young generation, ranged from unemployment and socio-economic inequality to rising suicide rates, isolation, acute social withdrawal, and a fixation on personal appearance.

South Korean artist Jaha Koo is part of this lost generation. One day when his electric rice cooker Cuckoo informed him that his meal was ready, he experienced a deep sense of helpless isolation that encouraged him to reflect deeper on South Korea’s current state of affairs.

In bittersweet and humorous dialogues, Jaha and his clever rice cookers Hana, Duri, and Seri take you on a journey through the last 20 years of Korean history, combining personal experience with political events and reflections on happiness, economic crises and death.

Korean with German and English surtitles.