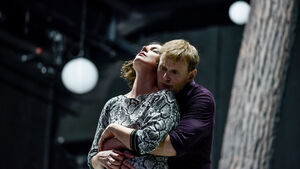 Edward Albee’s contemporary classic Who’s Afraid of Virginia Woolf? is a wolf in sheep’s clothing. What starts out as a straightforward marital feud between George, an ageing professor and professional failure, and his dipsomaniac harridan of a wife Martha reveals itself to be much more nuanced.

At the heart of their intoxicated quarrels lies a deep-seated desire to re-write the script of their complicated relationship; a relationship that is marred by a long history of disappointments, hypocrisy, fear of death and delusions. As the drinks and casualties pile up on both sides, neither their unwitting guests Nick and Honey nor the audience can distinguish what is real and what is an illusion in this marital war.

Who’s Afraid of Virginia Woolf? premiered in 1962 on Broadway. Albee’s play is one for the ages, it mixes witty repartee with outrageous insults, rambunctious humour with heart-wrenching sadness, drunken hilarity with boundless rage. Maria Schrader and Devid Striesow star as Martha and George.