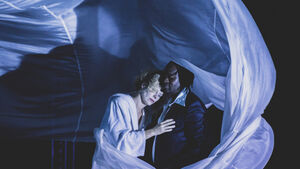 Roberto Ciulli is an authority in German theatre. His Theater an der Ruhr performs all over the world but is firmly rooted in Mülheim an der Ruhr. Ever since its foundation, the metropolitan theatre company encouraged international cooperation of artists from all kinds of backgrounds. 85-year-old Roberto Ciulli, a global citizen who emigrated from Italy in 1965, traces the intersection of cultures in all of his works. He is situated right at the thick of it, revealing clashes and dreaming of peaceful co-existence. His critically acclaimed aesthetic approach is a colourful pastiche of social commentary, clownery and popular theatre. Ciulli is a stage magician who conjures up fantastic spectacles that are both challenging and artistically satisfying. His is a theatre for the people. The Ruhrfestspiele honour this exceptional director with a special exhibition.

Othello and Desdemona are in love and get married in secret. He is the ‘Moor‘ of Venice, an army General known for his dark skin. She is the fair and beautiful daughter of a Venetian senator. Othello is the stranger, the ‚other‘ who does not and will never belong to this society that he fights to protect. Forever an outsider, it is insecurity not jealousy that ultimately will be his downfall: He is all too eager to believe Iago’s lies and malicious allegations, ready to doubt Desdemona; because he can’t fathom that she should love him. Othello is one of Shakespeare’s great tragedies. In its centre: not so much the eponymous hero but Iago, spinning his web of lies in intrigue like a spider, one of the most fascinating villains in theatre history.