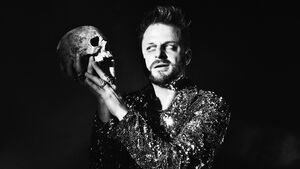 Hochmair, who embodied Everyman at the Salzburg Festival in 2018, creates an apocalyptic spoken-word concert. Accompanied by the experimental sounds of Die Elektrohand Gottes he impersonates all characters of the play to create a polyphonous monologue. Hoffmannsthal’s tale of mortality, guilt and divine reckoning is thus brought into the 21st century.

Phillip Hochmair is an Austrian actor who is well-known for his extensive work in film and television. His on-screen appearances include Die Manns, Die Vaterlosen and Die Vorstadtweiber. He has been working on his experimental Everyman since 2013 when he first took on the role.