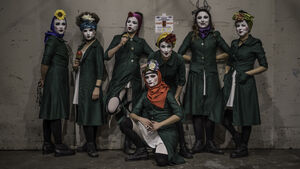 Aesthetically, the ladies can be linked to The Tiger Lillies, serving a similar morbid charm inspired by classic film noir and silent films of the 1920s.

The political content of their concerts is more than mere show: during the Maidan Revolution in 2014, Dakh Daughters were at the forefront of the protests, performing on the barricades. Their song “Roses/Donbass” became an anthem for the movement and a viral YouTube video.