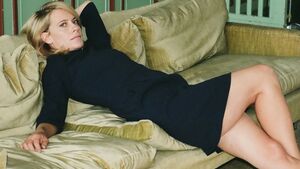 Malina is Ingeborg Bachmann’s first and only novel. This self-proclaimed “imaginary autobiography” tells the story of an unusual woman who falls love with two different men. Born in 1926, Ingeborg Bachmann is among the most influential German writers of the post-war era. Her varied oeuvre encompasses short stories, prose, poetry and translations. Bachmann won the Georg Büchner prize, Germany’s most prestigious literary award, in 1964. She died in 1973 in Rome.

Caroline Peters is a renowned actress who has worked at all important German theatres. Since 2014, she is a company member at Vienna’s Burgtheater. She has won countless awards, such as the Grimme Award, the Bavarian Television Award, the Nestroy Award and the “Theater heute” Actress of the Year Award (2016 and 2018).